Another Commandant, Another Court Martial

The Battle of Baltimore, 1814. Marines under then Captain Gale man batteries in defense of Fort McHenry in a battle for which Gale received a brevet promotion to Major.  Image courtesy of Naval History and Heritage Command

The Third Commandant of the Marine Corps is probably my favorite out of all of them. His reign was so brief, no portraits of his likeness are known to exist and his burial location is still unknown. A bit of a rascal, he killed Navy Lieutenant Allen Mackenzie in a duel at the turn of the century. Major William Burrows gave his implicit endorsement of the killing, expressing hope that it would make Naval Officers respect Marines more. 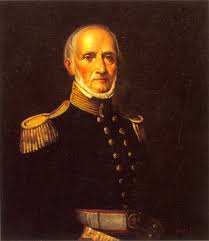 After the death of the second commandant, the Marine Corps was in a lurch. The ambitious Brevet Major Archibald Henderson, who referred and prosecuted Franklin Wharton in a court-martial and Brevet Major Samuel Miller jockeyed for position for an appointment to the post. Henderson became acting commandant, but Anthony Gale was the senior Marine in the Marine Corps. President Monroe appointed Gale to the post to preserve the seniority rankings.

Gale faced problems straight away. Marine Commanders in the field faced new Navy regulations which diluted their power. Some speculation exists that Henderson, who had chafed at the leadership under Wharton, treated Gale poorly as well. Eventually, Major Samuel Miller brought charges against Gale and put him under arrest. Arrested officers were nominally bound by honor to stay under arrest and Gale decided to not remain arrested, wandering out and continuing his boorish behavior
Miller charged Gale with behavior that seems more appropriate for a trouble making lance corporal in the modern day Marine Corps. These charges included Habitual Drunkenness, Conduct Unbecoming of an Officer and a Gentleman, and signing a false statement. The first charge came because apparently, Gale spent the month of August in 1819 in a drunken stupor in and around Washington, visiting brothels and “common dram shops” to the point where performing his duties became impossible. The second charge accused the commandant of visiting a “house of ill repute” and of wandering in the streets shouting that he “did not care a damn for the president, Jesus Christ or God Almighty.” The third charge accused him of threatening his paymaster, calling him names and trying to engage him in a fistfight.

After nearly a year of charges being levied, Gale was found guilty on most of the charges against him and cashiered from the military. Gale would eventually receive a pension for his time in the Marine Corps, and by the late 1830s had the largest pension of any other Navy or Marine Corps officer at 25 dollars per month. By 1820, 2 out of three Commandants of the Marine Corps had been court-martialed and one of them had been convicted and kicked out. An auspicious beginning to be sure.

I work at the National Museum of the Marine Corps.
View all posts by Kater »
« Previous post