Because of this class, I have been able to use some of my new skills for my job as a curator. Right now, we are about to have a combat vehicle, which is going on display in the National Museum of the Marine Corps painted. I chose to have the vehicle represent the 3d Light Armored Reconnaissance Battalion, or 3d LAR, which fought in Operation Iraqi Freedom. I chose to make the vehicle appear as it did in March 2003.

At that time, the unit pained large wolf heads and chevrons on their vehicles to allow other units on the battlefield to see at a quick glance who they were. They used cardboard templates to paint the vehicles, but the cardboard templates have long been lost. So, to make up for the lost templates, I chose a photo from the time, traced the items that we want to recreate, and converted it to a vector drawing. Our exhibits shop printed the items on a vinyl printer so that the paint shop could paint the recreated markings on the vehicle. Our exhibits folks could have done it, but this was good practice for me to hone my new skills as well as to lessen their burden

Here is the unit’s vehicle in Iraq in the March-April 2003 timeframe.

This is a JPG version of the vector file.

This week, we also read about the Lost Museum digital display. I was immediately reminded of my childhood, playing the computer games. I played around soaking up the nostalgia of my adolescence. Even the Joshua Brown article mentioned that the games were the basis for the display style.

So the Lost museum ends up being a  nostolgic trip to the older digital formats which was representing a museum of the days of yore. Additionally, it was kind of fun. Museums don’t often represent a history of museums. This was a fun way to look at museums as a history professional.

I sure think that this kind of project would be really fun to see updated on a more modern style. Many museums offer virtual tours, but not like the Lost Museum. Further, the recreation of a museum that was lost is a novel idea.

The virtual tour needs to be continually updated too, if it is an active museum. For instance, our Museum’s virtual tour is now obsolete, as the helicopter represented has been replaced.

Original Helicopter in the virtual tour 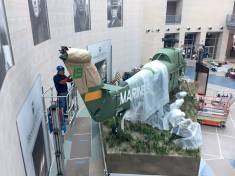 New helicopter during the installation in February-March 2016

This week I commented on Mark’s, Tam’s, Kim’s,Pearl’s, and Amy’s blogs.

4 responses to “Using skills from class and Virtual History”