Here is the link to my website image page

I am having a lot of fun with this class, and these photo projects. I have learned a lot from the research that I have done to color these photos. My office is literally meters away from the beaches where the Marine Corps developed the doctrine that it used throughout WWII.Finding my office building from 1930s photographs has been a real treat. And taking the photographs down to the areas where Marines operated 100 years ago brings the history to life in a really powerful way to me. I hope that I will be able to convert that into a website.

For one of my engravings, I chose a recruiting poster that came out in late 1918. I found the poster in a classroom full of Marines who had returned to Quantico after WWI. There are several indicators that they are mostly combat veterans who probably put up the poster out of pride. 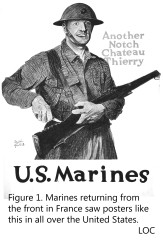 Engraving transparency. I did not save it as a PNG so that I could put it on WordPress.

The chevrons on the coat on the bottom left Marine indicates that the wearer spent a year overseas. Just above him is the recruiting poster. DEFENSE DEPT. PHOTO (MARINE CORPS) 514865

I also did another colorization of Marines storming the beach outside of my office. It was pretty fun.

Overhead of the curvature

I found a pretty neat way to get the detail on trees too. Used the same technique that Dr. Petrik showed us for the engraving. Essentially, for small details, I used blending options to isolate small details and saved the selections. After I put the whole picture back together, I could load selections that were parts of the small details such as trees and rocks and color them. Also, I created separate curve layers on selections to make distant objects more sharp compared to the background.

Here is my vignetted photograph. It is of then Brigadier General Smedley D. Butler, who is one of two Marines to be awarded two medals of honor. He was in charge of the Base at Quantico in the 1920s before becoming the Philadelphia Police Chief while on active duty. This was certainly unconstitutional. To keep up their fitness, Marines from Quantico would hike to Civil War battlefields and stage reenactments as far away as Gettysburg.

The Marines are using bolt action rifles and a M1917 Browning Machine Gun at the 1922 Gettysburg reenactment.

Here, Butler is leading his Marines to the Wilderness. It was an odd sight, as the Marines would wear their contemporary gear and fire modern rifles and artillery pieces. 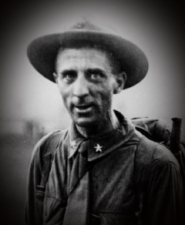 I cropped this image and restored some f the blemishes.

According to legend, Butler did not believe the story about General Thomas Jackson’s arm being buried at Chancellorsville Battlefield, and made a bet that Marines would not find the arm buried there. Marines dug it up, supposedly found the arm and reburied it (the legend is not true.)

Revisiting last week, here is some more detail about my seaplane from last week. There were originally two seaplane hangars that went straight down to the water, ande a plane could be put on a dolly and rolled to the water. One still stands, the other was damaged and razed several decades ago.

Here is the original.

view of beach in modern day where the seaplane photo was taken.

This is the original seaplane hangar built in the 1920s. It served as an automotive garage in the 1980s and now is storage for the Quantico fire department.

In the end, I think I have a lot of raw material  to work with for the project. I hope that the work I am doing translates into a project that people enjoy.

I commented on Joshua’s, Mark’s, Danielle’s, and Jenna’s Blogs this week.