This week I tried my hand at a few different photographs to see how it went and what I needed to improve on. Coloring the foreground is getting easier, but realistic backgrounds are very tough for me.

I tried to colorize and “hydroplane” that was taken about 300 feet from my office 100 years ago. The The plane was a treated fabric that would have been a shiny grey. Getting the aircraft into that color was pretty hard, an I do not feel like I nailed it.

The second problem is that the photograph’s background was the Potomac river and the Maryland Shore. The detail of the water was almost gone in the photograph, and just painting it blue did not work. Also, the trees on the shore looked goofy and cartoonish. So I took a photograph of mine at that spot and used the color, texture and trees to restore that part of the photograph. I did make the water a little more blue than my photo just to reinforce the water look. 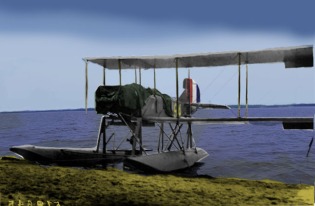 Here is the finished product.

Here is the original.

Here is one of my abandoned attempts to make the background look like sky and water.

I used the clone stamp to remove the kayak. It was a rougher job because the hydroplane sits on top

I found another photograph that had a lot of components, Including Marines, civilians, cars and a cannon being drug through the street. Again, the background seemed to be the hardest part. I think I got the color of the clothing correct and the vehicles, but the dirt street and trees in the background still seem off. I played with gradients and opacity, but I’m still not happy. It looks like one of those colorized postcards from the 1940s.

Here is the original photograph

This is a shirt that they Marines would have worn on Quantico in 1918, and I used it as the basis for the uniform The hats were woolen and different in color.

Here is the first attempt. the ground and sky seem too vibrant

I toned down the street and it looked better.

I toned down the street and the sky in this image.

I am trying to practice, and this is still a lot of fun. I probably should spend less time on this and more time on my project site.

For the second photo, I don’t think I did too much to hurt historical accuracy. The hydroplane has made me ponder if what I did was okay. I think I would need to be honest about what I did before I tried to publish it as historical evidence for anything. I tried to make sure that the conditions were the same, and I don’t think the river environment in Maryland has changed so much that I was introducing a terribly new shoreline. I felt that the trees and water was too important to not introduce.

I would love to know what everyone else thinks about the hydroplane. From last week’s discussion I get the feeling that it might be a good topic for debate, if anybody even reads this this week.

I posted comments on the following blogs: Claire’s, Pearl’s, Theana’s, and Kim’s.