One of the most poignant points of Morris’s exploration of the FSA photographers is that Photoshop is not needed to alter photographs, changing captions is useful as well. Though the story is apocryphal, William Randolph Hearst once shouted “You furnish the pictures. I’ll furnish the war!” Whether he said it or not is not as important as the notion that people understood that this type of manipulation was possible.

In the Israeli-Lebanon War in 2006, Reuters published a photograph of Beirut after an Israeli airstrike on the city that had been altered digitally. The photographer, Adnan Hajj, mind-mindbogglingly decided to add more smoke in a photograph that already spoke volumes about the devastation of the city. I can’t even imagine what the photographer was as thinking,  because the original was a very good photograph and he did such a poor job in his alteration.  Reuters retracted several hundred of his photos.  (I am not posting side by side photos because they are copyrighted)

Another example (I’ll post it if I can find it again) was a military history magazine publishing the infamous photograph of the cannonballs on the road at the Battle of Balaclava in the Crimean War. It is very likely that Roger Fenton took the first photograph and then rolled cannonballs into the road for a more effective picture. 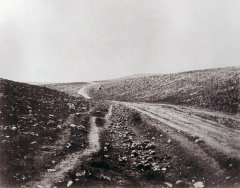 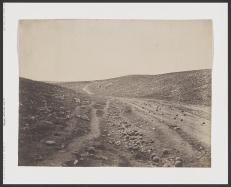 During the Spanish Civil War, Robert Capa took a photograph of a Republican soldier allegedly being shot, which became the most iconic image of the war. Scrutiny of the photograph shows that the event could not have happened where Capa claimed. Investigators continued to pull at the string until it unraveled, and now it is regarded as staged. (I have provided a link to the photograph because it is copyrighted)

In a way, I understand why photojournalists alter photographs. In 2003, I was in the Marines and was in the Invasion of Iraq. I took a lot of photographs when I could on disposable cameras. Due to sand and sandstorms, the the cameras usually only worked for about 10 or 15 shots before they became clogged with sand. Everything is grainy and pixelated. Explosions which were pretty close and dynamic look small and detached in the photographs. Few of us had good digital cameras, and those that did had a host of problems keeping them working. I therefore see why some people are tempted to change photographs to convey the deeper sense of being there, but I will go on record saying that I do not condone alteration. I have been using some of my photos for the Photoshop tutorials to see if I can get any more information out of them though. 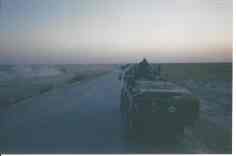 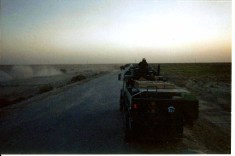 I know my post has been largely military related, and I do apologize for that, and I am even more sorry for my own anecdotal vignettes. But I wanted to bring up the larger point that photojournalists take photos for a living and have to produce good, dynamic images to maintain their livelihood. While I was disappointed that my photographs ended up being horrible, other people have the added pressures of having to produce. I do not see a problem with my photo restoration. However, Fenton, Rothstein, Capa and Hajj, all crossed the a line that, in my opinion, destroyed the veracity of their works.

I really liked James Curtis’s take on the Evan Walker photos. Sometimes, I think he was a little quick to write off things as moved because they didn’t fit in that space. Take the case of the rocking chair. Growing up and visiting my great grandmother in the Appalachian Mountains in Blairsville, GA, I would notice that sometimes her furniture was in weird places. She lived in a cramped house and would put furniture (including rockers) on the wall so that she could move around and pull out the furniture that she wanted to use. Scrutiny and examination is good, but I don’t think you can make such sweeping claims as Curtis tended to do.

As historians, we all know that every single solitary thing that we write down or utter to a journalist will be scrutinized. At my job, I feel that everybody is trying to “stump the chump” finding some arcane way that we are wrong. Sometimes people are being pedantic, sometimes they are absolutely correct, but the criticism is always there. In the days of inter-connectivity, scrutiny is (as well it should be) everywhere.

I commented on Claire’s and Jenna’s blogs.